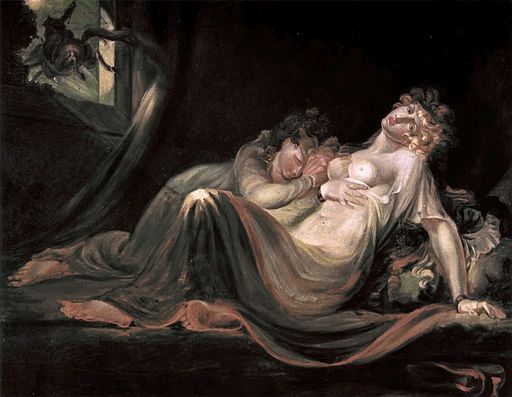 Ghastly Affair is the “Gothic Game of Romantic Horror”. But what exactly is “Romantic Horror”? The “Horror” part of the phrase is generally understood, but how can “Horror” also be “Romantic”? The question is perhaps further confused by the three meanings of “Romantic” – one relating to love, the second relating to literary and artistic “Romanticism”, and the third relating to the historical period sometimes called the “Romantic Era”. In the case of Ghastly Affair, all three meanings are intended.

In the 18th century, the word “romance” was used to indicate what would be called “fantasy” today. A story that had fantastic and supernatural elements was deemed a “Romance”, and thus the original Gothic novels were (and are) called “Gothic Romances”. Romanticism was a historical movement of writers, artists, and musicians who promoted imagination, and free expression of personal truth. Literary Romantics included the poets Coleridge, Wordsworth, and Byron, and writers such as Novalis and Chateaubriand who followed Goethe. Beethoven was the premier musical Romantic. Artistic Romanticism was epitomized by the works of Friedrich, Turner, and Delacroix. The great Romantic artist E.T.A. Hoffmann composed music, wrote, and drew. Whereas 18th century Classicism valued order, symmetry, rationality, restraint, and the mundane world, Romanticism concerned itself with catastrophes, irregularity, emotion, freedom, and the supernatural. Classicism promoted the power and perfectibility of humanity – Romanticism instead emphasized the power and perfection of Nature. Romanticism also had a distinct tendency towards the morbid. In many cases, literary Romanticism was just a polite cover for writings that would otherwise have been tarred with the disreputable label of “Gothic”. Coleridge’s “Rime of the Ancient Mariner”, a cornerstone of Romantic poetry, is really a hallucinatory story of supernatural horror in verse. The modern Horror genre in fact is a development from the Gothic genre so heavily intertwined with Romanticism. It isn’t so much that Gothic is Horror plus Romance, as modern Horror is Gothic minus the Romanticism.

Love, to the Romantics, was the greatest force of all, and staying true to love was more important than life itself. Love and death for them were often the two heads of a single beast. The most thrilling kiss is delivered on a precipice, under threat of fatal punishment, in defiance of some terrible authority, because one obeys the supreme authority of Desire. The monsters that move through the pages of Gothic novels are the rampaging incarnations of desire – terrible and irresistible. The Horror of Ghastly Affair is Romantic, not only because it concerns itself with the dark corners of desire, but also because it works through the themes and motifs of Romanticism. It is the simultaneous stirring of terror and attraction, which erupts in an irrepressible expression. Characters in Ghastly Affair may find themselves bound in love to monsters of every kind, whose monstrosity itself is magnetic. They exist in a world where reason breaks down, and the shadows are alive with incomprehensible things. This world of horrors is filled with lovely people, places, and things, some possessed of a beauty so extreme it terrifies. Romantic Horror is being overcome with the feeling of arousing panic, of being uplifted by fear, of inviting the lovely darkness to consume you.

2 thoughts on “What is “Romantic Horror”?”