The early adulthood of 19th century wild-child Mary Shelley was the stuff of romance novels, culminating in the creation of English-language Science Fiction genre with her classic “Frankenstein”. She would later go on to be the driving force behind the popularization of her husband Percy’s poetry, as well as being a pioneer of post-apocalyptic fiction (through her 1826 novel “The Last Man”). The following write-up is for Mary at age 18, when she is just about to create the now iconic figures of Victor Frankenstein and his Creature. 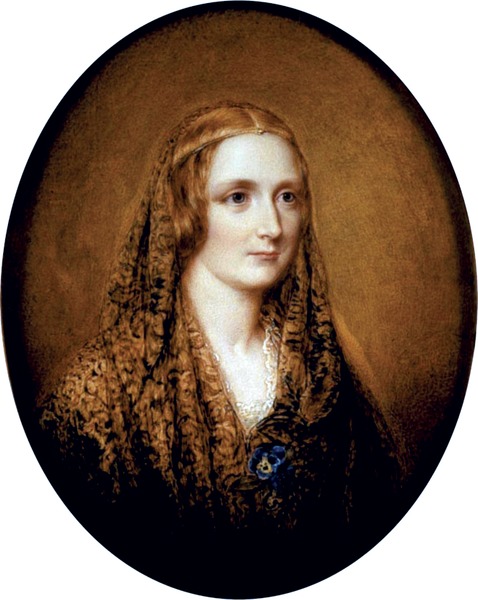 Scandalous daughter of radical authors, and future creator of “Frankenstein”

Typical Equipment Carried: Loose white dress, reticule (with journal and pencil)
Residence: A cottage near the Villa Diodati, the house rented by Lord Byron on the shore of Lake Geneva.

Contrary to her scandalous reputation in England as a shameless slut and enthusiastic home-wrecker, Mary’s demeanor is strikingly controlled and intellectual. She can even come across as “cold”. In fact she often suffers from deep melancholy that she does her best to hide. Mary still grieves the death of her first child, although she will not speak of her. Although she often seems overly serious, and fears being personally ridiculed, Mary actually possesses a good sense of humor. She is always conscious of being the daughter of Mary Wollstonecraft, and feels an obligation to live up to what she thinks would have been her mother’s expectations for her. At the same time, she feels guilty for having been indirectly the cause of her mother’s death. Mary is also deeply troubled by her current estrangement from her father. Mary will be vocal in her support of Free Love, the overthrow of monarchies, reforming the criminal justice system, educating the lower class, abolishing slavery, and equality for women. She (and Percy) make a point of never using sugar, because it is produced by slaves in the Caribbean. Above all, Mary will never let any statement supporting the existing social order go unanswered!

Mary Shelley in Your Game:

The Player Characters might be among the guests caught up in the intrigues, debates, and antics at the Villa Diodati during the stormy week of June 16th. With her obvious occult interests, Mary will be particularly keen to speak any Magicians or Mad Scientists she might encounter! It is possible that one of the PCs tells a story, or makes a remark, that inspires Mary’s future literary output. The Presenter should always explore themes of “Frankenstein” whenever PCs interact with Mary – death, immortality, responsibility towards one’s creations, guilt, rejection, social justice, and the limits of science. Mary might be encouraged by Percy to take a Player Character as a lover, just as he had encouraged Mary and his friend Thomas Jefferson Hogg. It should be remembered that Mary’s five-month-old son William is with her, and she will not be able to go off on an adventure by herself, unless she leaves the boy with Claire, or one of Byron‘s servants.

Note: Different sources give conflicting dates for the chronology of events around the writing of “Frankenstein”, and disagree about how licentious the activities of that summer were. You should naturally present them in whatever way makes the best Gothic story!

2 thoughts on “Mary Shelley: a Historical NPC for Ghastly Affair”