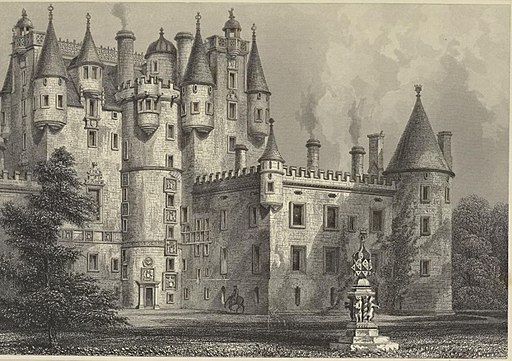 The castles and grand houses of Gothic stories are not simply background settings, but characters in their own right. The first Gothic novel is titled “The Castle of Otranto”, rather than “The Dark Scheme of Manfred”. Rightful ownership of the Castle is central to the plot. Emily Brontë’s tale of mad, destructive love and its catastrophic consequences is not “Heathcliff, Catherine, and the Lintons”, but “Wuthering Heights”. The ancient home of the Earnshaw family is as much a participant in the story as any of the flesh and blood characters.

A Restless House is not just a mute witness to the dramas that unfold within its walls. Like other Gothic characters, it is obsessed with the fulfillment of its own needs, and can lash out at those who thwart its desires. A Restless House differs from a true Haunted House in that the strange events within its walls are not necessarily caused by an indwelling Ghost, Fairy, or other such entity (although an Restless House may also be Haunted by one or more Spirits). Rather, it is the house itself that hungers for satisfaction.

The unusual Preternatural means of dealing with angry Spirits (Exorcism, Summoning, Binding, etc.) are completely ineffective against an Restless House, because there is no Spirit to control. Such Effects might expel any Ghosts or spirits trapped in (or drawn to) the House, but cannot lay the House itself to rest. Likewise, Faith is ineffectual, because the House cannot flee the presence of the virtuous. There are only two things that can be done – learn and submit to the House’s desires, or discover its Heart and lull the House to sleep.

Naturally, the communication may be quite challenging to interpret correctly. Note that any apparitions created by the house are not true Ghosts, and are therefore not subject to Faith or any Preternatural effects relating to Spirits (or the Undead).

Choose (or roll) 1 to 4 times. Some house always express their displeasure the same way, while others can show their anger in multiple, different ways. All signs will suddenly stop as soon as the House’s desires are again satisfied. In the case of creatures drawn to the estate, they will suddenly decide to leave.

A Restless House has a Heart – a place or object where the building’s power is concentrated. If you consider Highdark Hall to be Restless, for example, its Heart would be the “Cave of the Ancient and Hungry One”.

Once its Heart has been identified and found, the House can be be lain to rest. At least, for a time.

The Heart of a Restless House will always re-form if destroyed, as long as the remainder of the house still stands. The sole exception is if smashing the Heart is the method by which the House is actually put asleep. If the House is demolished without first lulling it asleep, the builders of any new structure put on the site will feel an overwhelming urge to preserve, incorporate, or re-create the original Heart.

4 thoughts on “The Desires of Restless Houses”