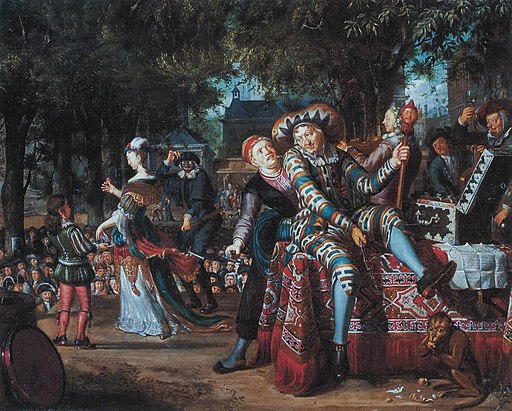 Presenting a new iteration of the perennial Jester Class! Like my other “Reimagined” Character Classes for the B/X rules (such as the Dwarven Dungeoneer), this one is built using the five “Special Abilities” + two “Restrictions and Weaknesses” format, has no “Prime Requisite”, and assumes a five-point Alignment system. Otherwise, I’ll let the Jester speak for himself. Or herself. Or theirself. Or is it themselves? One of those!

Your character follows the ancient and honorable profession of the Jester, lightening the hearts of the afflicted. Okay, really they tell a lot of fart jokes. But, they’re really, really funny fart jokes. They tell other jokes as well, but let’s face it, farts are funny. And how funny would it be if you yourself were to fart while reading this? Do it. Nobody’s paying attention. And, if they are, do it anyway.

Why did your character become a Jester? Probably, they farted a lot. Then they learned to fart on command, and honestly, what else are they going to do with that skill? Perhaps they figured out that people will let a Jester get away with almost anything. Like farting as much they do. What the hell are you making your poor character eat?

Sure, there are some Jesters who don’t tell fart Jokes. Who cares about them?

But, all is not sweetness, light, and innocent farts in the world of Comedy. There are other who turn the awesome power of Comedy to Evil ends. Known as “Clowns”, they are known for painting their faces in garish styles, wearing frightful wigs, and cackling in malicious glee at their own jokes. They were responsible for some of the wost atrocities during the Reign of the Monsters, and are universally feared. When a normal Jester meets a Clown, the result is almost always a vicious duel of jokes, capers, pratfalls, and sight gags. Witnessing such awesome comedic power in one place might well drive an ordinary person to insanity.

Acrobatics: Your can roll a Dexterity Check for your character to do any of the following:

Additionally, you can make a Saving Throw versus Breath Weapon to allow your character to tumble out of any fall of 10 feet or less, taking no damage at all.

Best of all, your character can fart and belch at will. It would be naughty and wrong, of course, for the GM to insist you role-play that properly – but it could happen. Prepare with beans and beer!

Dodge Blows: At 1st level, a Jester’s base Armor Class is 1 better than normal.

Imitate Sounds: With a successful Dexterity Check your Jester can Imitate any sound they have heard before.

Jester Routines: At 2nd Level, your character learns a supernaturally potent joke or gag that they can use once a day.

Ventriloquism: With a Dexterity Check your character can speak (or Imitate Sounds) without moving their lips, and throw their voice so it appears to be coming from any place up to 50’ distant.

Restrictions and Weaknesses of Human Jesters

Comical Weapons Only: Jesters cannot effectively employ normal weapons. However, they are adept at the use of Comical Weapons which would be either impractical or completely ineffective in other hands. The following are some Comical Weapons (and the damage the inflict in hands of a Jester):

A unique quality of Comical Weapons is that they cannot actually kill any natural animal, or humanoid creature. Whenever the result of an attack indicates that the Jester would slay their target, the victim is actually “Bopped on the Head” – reduced to 1 hp, stunned, and unable to take any actions for as many Rounds as the Jester has Levels. A creature who is Bopped on the Head can be automatically killed by any meanie wielding a regular weapon.

No Armor: A Jester cannot use their Special Abilities while wearing armor of any kind.

Permutations and Variations of the Jester

Special: Gnomes are such naturally talented Jesters that they can actually wear armor – and armor that fits them poorly just makes them funnier!