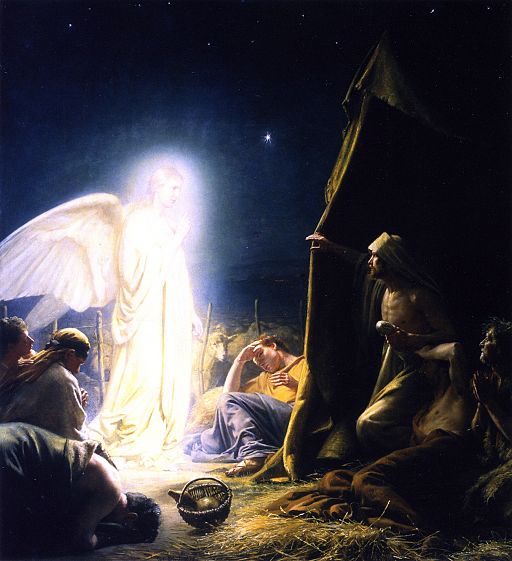 Rituals for summoning the the Angels of the Planets are common in magical grimoires. Here then are game statistics for those Magician Player Characters who might want to avail themselves of some heavenly knowledge and power!

A celestial administrator of astral energies.

Creature Class: Spirit (Angel)
Number Appearing: 1
Initial Impression: An odor like incense, and a nimbus of colored light, within which is a robed human figure with wings.
Size: Human-sized (or by current form)

Natural Habitat: Heaven, the void between the planets, Earthly locations associated with their areas of concern.
Level: 7

The seven varieties of Planetary Angels are the Celestial beings most frequently Summoned by Magicians. Each is administers a broad category of phenomena that fall under the categories of the astrological planets: Saturn, Jupiter, Mars, the Sun, Venus, Mercury, and the Moon. Collectively their purpose is to enforce the Divine will in the Mundane World, and attempt to thwart the schemes of Lucifer (and the other spiritual powers who oppose Heaven). They are thus (along with the Guardian Angels), the celestial powers most engaged with events on the Earth. Unlike the Guardian Angels, however, the concerns of Planetary Angels are broad and collective, and they can seldom take an interest in the fate of any individual person.

Many Magicians wrongly believe that it is safer to Summon and Bind Planetary Angels than Devils and Demons. Ceremonies and Rituals for evoking the Planetary Angels (along with lists of their names and sigils) are thus common. Such summoning may indeed be tolerated if the Magician is only in search of knowledge that they will put to good use. However, the powers of Heaven are particularly enraged when Angels are employed for evil purposes – and unlike most infernal beings, Angels can enter the Mundane World whenever required. The Magician who incurs the wrath of Celestial beings will find that they can only survive the onslaught of heavenly justice by means of increasingly costly and disadvantageous deals with the forces of supernatural Evil.

Planetary Angles vary in their appearance and duties according to the traditional correspondences of their their associated Planets:

The Angels of Saturn are concerned with matters of time, aging, death, darkness, graveyards, mining, and the Magical Sphere of of Evocation. They tend to be somber and taciturn in disposition, and resemble elderly men and women. Their bodies are enveloped in indigo light, and they smell like myrrh. They have the wings of ravens, and often carry hourglasses and scythes.

The Angels of Jupiter are concerned with matters of wealth, prestige, charity, luxury, churches, High Society, and the Magical Sphere of Fascination. They tend to be joyous and magnanimous in disposition, and resemble plump men and women with aristocratic features. Their bodies are enveloped in violet light, and they smell like cloves, nutmeg, and ceder. They have the wings of eagles, and often carry scepters or maces.

The Angels of Mars are concerned with war, fire, soldiers, male potency, volcanoes, weapons, armor, castles, metal forging, and the Magical Sphere of Malediction. They tend to be fearless, determined, and protective in disposition, and resemble muscular men with square jaws, strong chins, and noble brows. Their bodies are enveloped in red light, and they smell like cinnamon. They have the wings of hawks, and often carry swords or spears.

The Angels of the Sun are concerned with healing, light, protection, friendship, social harmony, the physical health of males, the regulation of the seasons, and the Magical Sphere of Blessing. They tend to be friendly and caring in disposition, and resemble handsome young men. Their bodies are enveloped in golden light, and they smell like frankincense. They have the wings of swans, and often carry golden orbs.

The Angels of Venus are concerned with beauty, love, art, pleasure, sex, and the magical Sphere of Glamor. They tend to be sweet and flirtatious in disposition, and resemble lovely young women. Their bodies are enveloped in green light, and they smell like a mix of roses and myrtle. They have the wings of doves, and often carry bouquets, hand fans, or other typically feminine accouterments.

The Angels of Mercury are concerned with schools, business, science, money, technology, writing, investigation, finding thieves, magic in general, and the Magical Sphere of Divination in particular. They tend to be whimsical and quick-witted in disposition, and are androgynous in appearance. Their bodies are enveloped in light that flashes many colors, and they smell like sandalwood. They have the wings of magpies, and often carry wands or books.

The Angels of the Moon are concerned with the natural world, agriculture, gardening, bodies of water, the growth of plants and animals, the physical health of women and children, childbirth, physical transformations, the night, and the Magical Sphere of Transmutation. They tend to be maternal and kind in disposition, and resemble either mature women or young girls. Their bodies are enveloped in blueish-white light, and they smell like jasmine. They have the wings of house martins, and often bear some kind of agricultural or domestic instrument (such as a sickle, broom, or spindle).

Angelic Characteristics: Like other Celestial beings, Planetary Angels are immune to all mundane weapons, all poisons, all diseases, any effect of an electrical nature, and all Fascination effects (except those which specifically target Spirits). They can see perfectly regardless of illumination, are immune to blindness or any other debility caused by extremely bright light, retain the ability to distinguish colors in conditions of total darkness, and do not need time to adjust their eyes to changing light. Planetary Angels can speak, write, and understand all languages and forms of communication. They can also enter the Ether, and the Astral Plane, at will.

Planetary Knowledge: Planetary Angels can answer any question in matters relating to their areas of concern. They also possess mastery of all professions, arts, and crafts associated with those fields. For example, the Angels of Saturn have knowledge of embalming, while Angels of Mercury are skilled mathematicians. An Angel of Venus can help one write an effective love letter, while an Angel of the Sun could teach one how to be more likable.

Planetary Powers: Each type of Planetary Angel has mastery over a single Magical Sphere. In Addition to the powers common to all Angels, a Planetary Angel can utilize any Power from their associated Sphere.

Additionally, such Powers never have negative drawbacks or complications when employed by Planetary Angels. For example, an Angel of Saturn can Raise Dead, without the usual possibility that the subject will return as a Vampyre, or suffer permanent insanity.

Like all spirits, Planetary Angels can teach the spells that correspond to their own Preternatural Powers. They always prefer to teach others the mundane means of achieving their goals, however, rather than impart potentially dangerous magical knowledge.

Affected by Magic that Targets Spirits: Planetary Angels are subject to all Preternatural Effects that summon, bind, and control spirits.

A malevolent entity that embodies the power of flame.

Natural Habitat: The Outer Darkness, the upper atmosphere of the Earth, volcanoes, any place that has been recently destroyed by fire.
Level: Equal to Hit Dice

Fire Demons are entities of pure evil that delight in causing destruction. They ultimately serve the terrible Fire Kings who desire the complete immolation of the Mundane World. Since they are beings of chaos, however, they usually work at cross-purposes to each other. Magicians who would enslave Fire Demons find them to be particularly rebellious and troublesome.

The upper atmosphere is said to imprison innumerable Fire Demons who cannot descend without being Summoned by a Magician, or one of the Fire Kings. Supposedly, the Demons will attack anything that passes into their domain, and are responsible for the fireballs and meteors that occasionally strike the earth.

The natural forms of Fire Demons are of varied appearance, but in all cases they will appear to be aflame, their eyes will glow like coals, and their mouths will vomit flames and smoke. They stink of sulfur, burning flesh, and heated metal. Although their bodies are burning hot to the touch, Fire Demons do not warm the air around them. Rather, like all Demons, they actually suck the heat out of the environment.

A Fire Demon’s flames are unnatural, and the Fairy Folk are therefore not particularly vulnerable to them. For that reason, malicious Fairies will often associate with those Fire Demons who have managed to make their way to the surface of the Earth. Fire Demons of 1 to 2 HD in strength are in fact sometimes called “Fire Sprites”, although they are not actually Fairies themselves. Likewise, the demonic Fire Kings hold court with the Fairy Erlkings, Cloud Kings, and Water Kings who torment humanity.

Demonic Characteristics: Fire Demons are immune to all weapons, except those which are made of iron, blessed, or otherwise enchanted. They cannot be harmed by acid, cold, disease, or any Special Ability or Preternatural Effect which targets minds or emotions (except those that specifically target Spirits, of course). They can see perfectly regardless of illumination, are immune to blindness or any other debility caused by extremely bright light, retain the ability to distinguish colors in conditions of total darkness, and do not need time to adjust their eyes to changing light. Fire Demons can speak, write, and understand all languages and forms of communication.

Burning Hot to the Touch: A character that deliberately touches a Fire Demon with their hand (or other body part) will be burned for 1d6 points of Lethal Damage.

Sage of Fire: Fire Demons have perfect knowledge of all arts, sciences, and crafts involving fire – metallurgy, glassblowing, blacksmithing, artillery use, etc. They are sometimes Summoned expressly for their knowledge, but preternatural means such as Bind Spirit are usually required to force the Demons to answer truthfully.

Demonic Weaknesses: Fire Demons are burned by holy water as if it was acid, cannot enter holy ground or touch blessed objects, and are subject to the power of Faith. Like all Demons, they are Vulnerable to Iron, and will not voluntarily touch it. Additionally, they are repelled by pure crystalline salt. As Spirits, they are susceptible to all Preternatural Effects that target spiritual entities. Strangely, they cause the entire Nearby Area to become discernibly cold rather than hot.

All Fire Demons can create Darkness, Detect Evil, become Invisible, and Transform into snakes, scorpions, lions, lizards, salamanders, or jackals. In addition, every Fire Demon will possess one of the following powers: (d6)
1 | Burning Hands
2 | Continual Flame
3 | Create Flame
4 | Enhanced Vision (to teach others)
5 | Light
6 | Resist Fire (to teach others)

Appearance of a Fire Demon